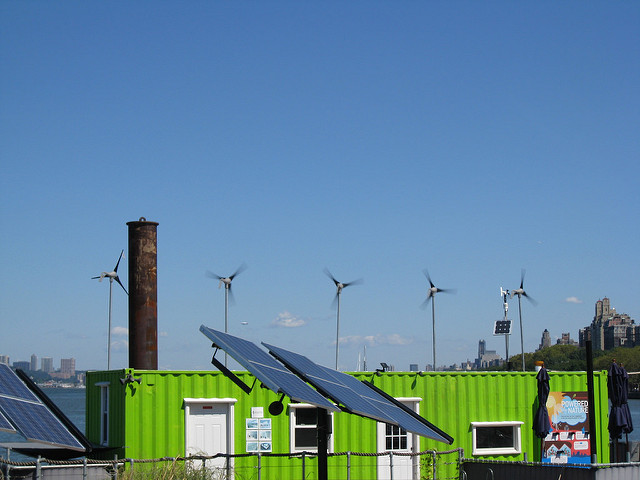 How New York City Can Reach Its Energy Storage Targets

Sustainable CUNY released a Resilient Solar Roadmap for NYC through its NYSolar Smart DG Hub in an effort to increase the deployment of resilient solar installations and achieve energy storage targets. The DG Hub assisted in developing NYC’s and the first municipal energy storage target of 100 MWh by 2020 in September of 2016. The roadmap is designed for NYC, but can be applied to the rest the market for solar in New York.  The roadmap identifies current market barriers and potential solutions for resilient solar growth.

State of Solar and Storage in New York

Solar in New York has grown rapidly in recent years, although residential solar growth slowed in 2016. New York State has a target of 3 GW of solar by 2023 and has already installed 871.75 MWs. NYC has a goal of 1 GWs of solar by 2030 and 100 MWhs of storage citywide by 2020. As of the end of 2016, 14 electrochemical battery storage projects totaling approximately 1,400 kWs have been completed in NYC. New York remains one of the few viable markets for behind the meter storage because of a combination of high demand charges and participation in demand response programs. 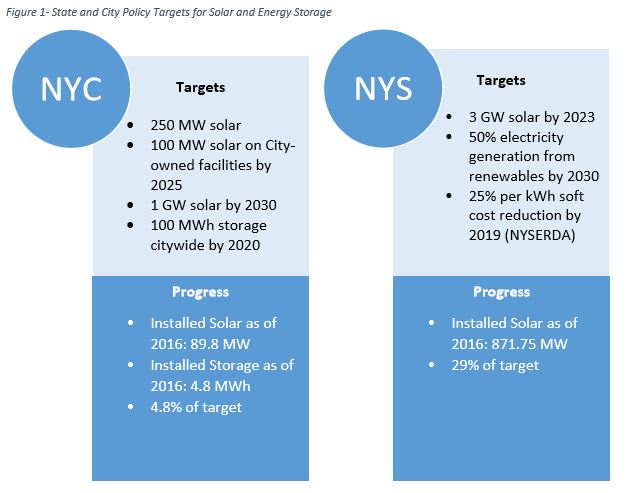 The roadmap goes into detail on several specific areas, including hardware, software and economics, which we have summarized below.

As a major next step in the roadmap, DG Hub will release a resilient solar calculator and information sessions with a particular focus on identifying opportunities by which resiliency can be monetized. The analysis will also include a “Value of Resiliency” analysis targeted at the groups that bear these costs (property insurance, commercial banking and government agencies).

Solar and Storage in Other States

California’s SPIG program could provide a valuable model for New York. The program was started in 2001 with the primary goal of reducing peak loads and $83 million is allocated to the program annually. Energy storage systems receive an incentive of $1.31/watt with incentives being paid at installation or over a five year period based on kWh performance. The residential energy storage market is expected to grow significantly in 2017 in California, as solar in California has slowed in 2016 and installers look to expand their offerings. In California, residential systems can only receive the incentive if they provide grid services and there is an additional 20% incentive if the storage system is form a California supplier. This should provide a boost to California storage companies, including Tesla and Sunrun, which have been impacted by increasing number of solar customers that are trying to lease vs. buy solar. There has also been progress with vehicle to grid storage opportunities, which may increase as consumers add home electric vehicle chargers in California. The SPIG program has had the following impacts: