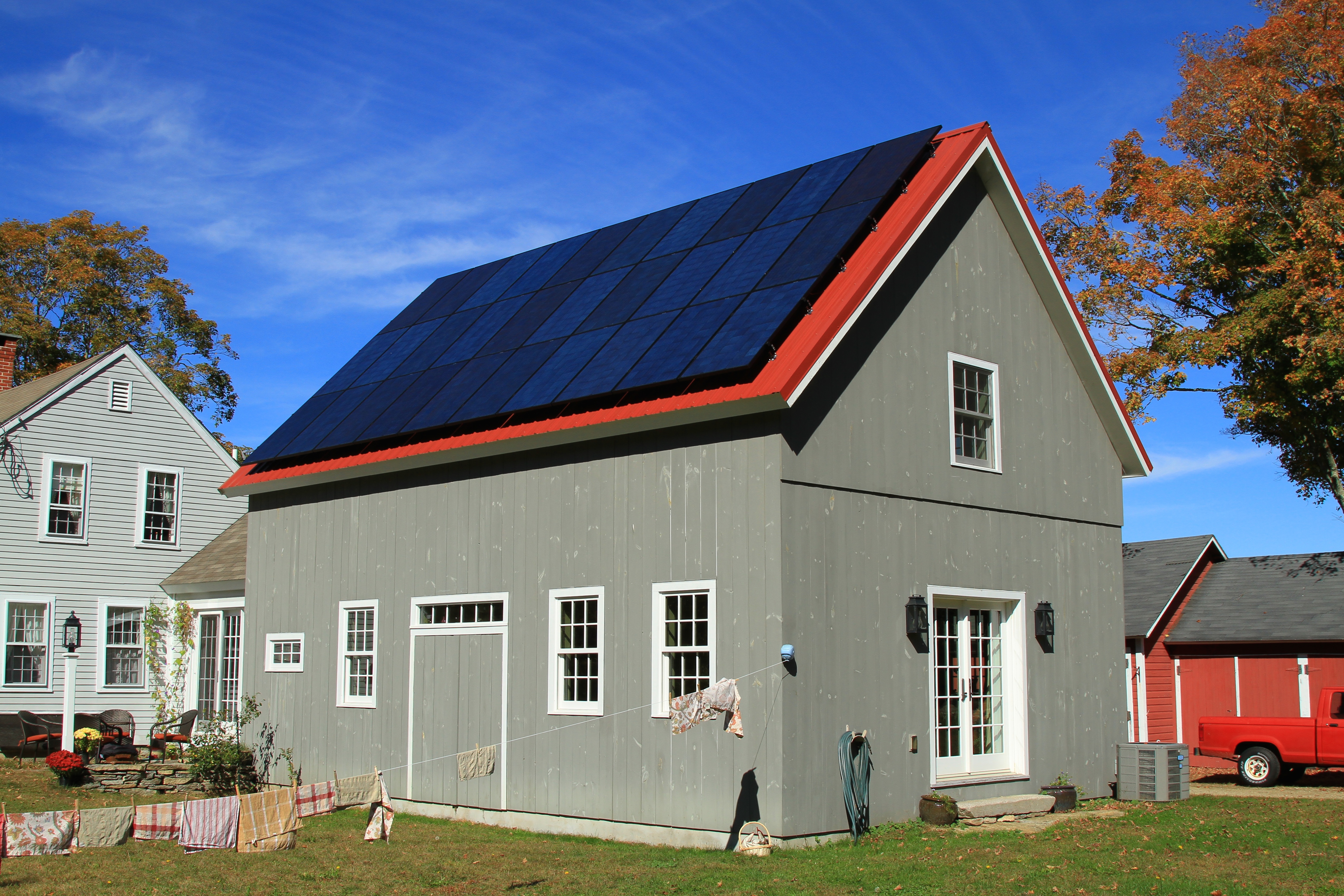 Solar is a complicated decision and Sunvago has compiled this guide to New York solar with the cost of solar panels in New York and advice on how to estimate cost and savings, navigate state and federal incentives, and find the best solar companies in New York.

The sections below provide more information on how to find the right solar contractor and system, but please use these price guidelines to ensure you do not overpay for solar. 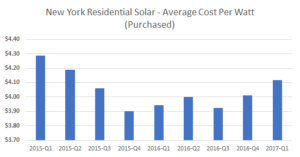 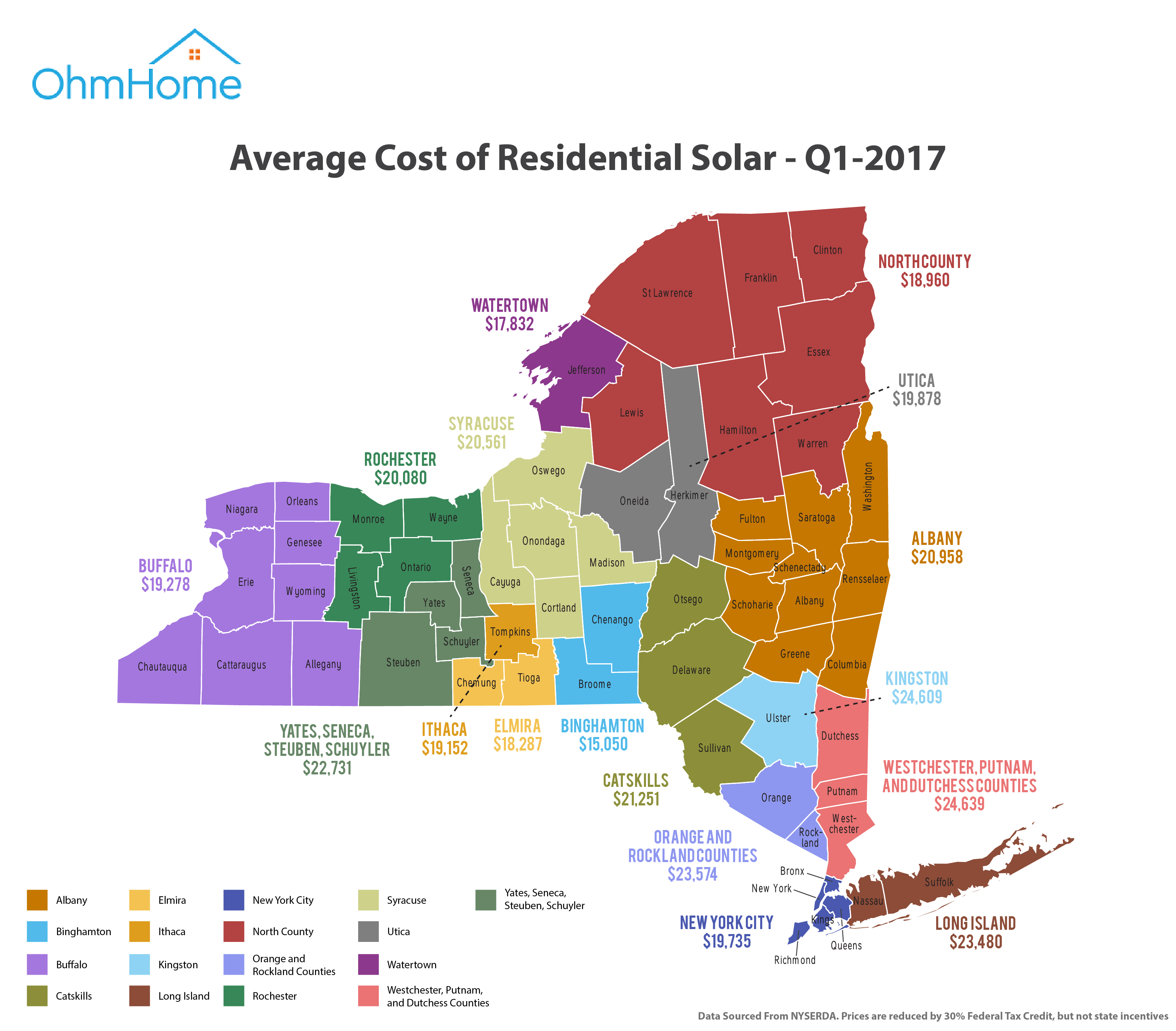 It is helpful to look at averages, but the best way to make sure you are not overpaying for solar is to look at a pricing curve. The price curve below is for host-owned systems (not leases) in Q4 of 2016 for larger and smaller systems. There are many variables that go into the cost of the system, including the quality of the equipment you choose, but it is clear from the data below that an acceptable range for the cost of solar panels in New York is between $3.00 and $4.50. 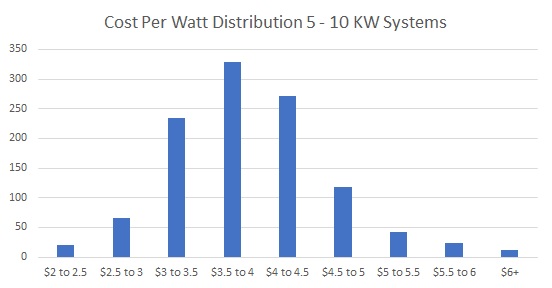 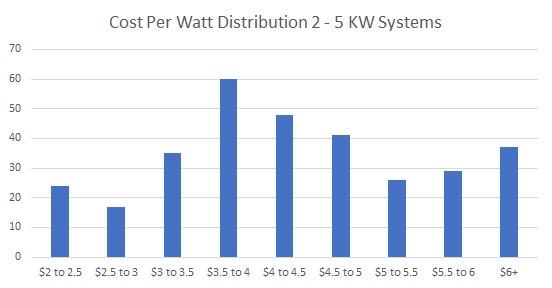 Residential solar installations have increased significantly in New York, although growth slowed in 2016.  From 2010 to 2016, installations have increased by ~45% a year to over 18,000 in 2016, making New York the second largest residential solar market in the U.S. behind California.  If you are interested in more specific trends, please read our research recap on the 2016 solar market in New York.  Many New Yorkers are switching to solar because of the decrease in price and high costs of electricity in New York.  According to the EIA, retail electricity costs in New York are $16.25 per kWh vs. $10.44 for the U.S., or nearly 60% greater.

New York has some of the most attractive solar incentives in the country, which can reduce the a solar system by as much as 50%.  In addition to the New York state incentive, there is the 30% federal tax credit.

Here is what you need to know regarding New York tax incentives:

The IRS offers a 30% tax credit for solar systems based on the cost after state rebates and credits (discussed above).  It is important to note that that federal tax credit only applies to purchased systems and you need sufficient tax liability to claim the credit.  The federal solar tax credit was set to expire in 2016, but was recently extended through 2019, at which point it will start to decrease to 10% by 2022.  The IRS form 5695, Residential Energy Credits can be found here.

Solar is a complicated decision and the best way to ensure you are satisfied with your system is to find an honest and reputable solar company.  We recommend reading our checklist before selecting a solar company.  We have researched the top companies in New York and graded them on popularity (# of installations), pricing and customer reviews (a combination of multiple review sites).